Yony Leyser spent his youth in cities with rich, queer histories and complex narratives around identity, race, displacement and belonging. From a young age, Leyser made it his life mission to explore these themes and give a voice and platform to those marginalised by society. 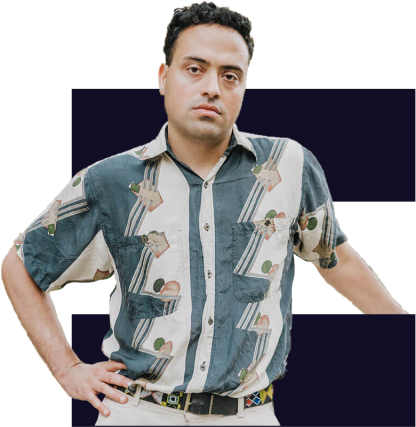 Yony Leyser is an artist, writer, director, and educator with a focus on subcultures and queer history. In 2010 Leyser released his debut documentary feature film, William S. Burroughs: A Man Within, followed by his first fiction feature film, Desire Will Set You Free in 2015. 2017 saw the release of Leyser’s critically-acclaimed documentary about the cultural and social movement Queercore: How To Punk A Revolution, with an accompanying book due for release in late 2020. Most recently Leyser wrote and directed W(A)RM HOLES, his first theatre production, which premiered in Berlin’s Maxim Gorki Theatre in 2019. Collectively Leyser’s films have been screened in over 150 institutions and festivals around the world, including Slamdance, Seattle International Film Festival,  BFI London Film Festival, ZKM Karlsruhe, Viennale, Guadalajara International Film Festival, IDFA, ACMI Melbourne,  Outfest, Frameline and HotDocs.

Born in Chicago in 1984, Yony Leyser is the descendant of a German-Iranian-Jewish family. He spent his youth in Chicago and Tel Aviv, two cities with rich, queer histories and complex narratives around identity, race, displacement and belonging. From a young age, Leyser made it his life mission to explore these themes and give a voice and platform to those marginalised by society.

Leyser has a B.A in Film and Journalism from NYC’s Eugene Lang College at the New School University, studied Film Production at University of Kansas and Film Studies, Animation and Live Action at CalArts. Leyser released his first film William S. Burroughs: A Man Within when he was just 24. In this film Leyser documents the life and work of “the first person who was famous for things you were supposed to hide.” The film is an unflinching exploration of one of the world’s first openly queer poets, junkies and challengers of censorship, demonstrating that Leyser is unafraid of looking at the dark corners, as well as the bright lights, of the queer experience. Variety Magazine wrote “Like his subject, Leyser strives to disengage from the conventional, while still being lucid. He succeeds admirably.”

Desire Will Set You free continued Leyser’s fearless examination of queer identity, belonging and hedonism. The fiction feature film sees an American writer of Israeli/Palestinian descent follow a Russian artist and escort down the rabbit hole of Berlin’s decadent underground queer scene. Through a kaleidoscope of drug-fuelled parties, freedom, desire and deviance, the film unveils what it means to explore the parts of the self that society deems off limits. “The director achieves a raw vitality with fiction-doc hybrid,” wrote Dazed and Confused.

QUEERCORE: HOW TO PUNK A REVOLUTION, Documentary, 82 minutes (2017)

Queercore: How To Punk A Revolution, dives into the world of the cultural punk movement known as Queercore. In response to society’s disdain and rejection of queerness, the LGBTQ+ punks of the 1980s formed an explosive, furious, vibrant army of kings, queens, rockstars and artists to perform in the underground institutions of Toronto, Portland, San Francisco and London. Leyser’s documentary paints a powerful and profound picture of how the global queer community mobilised to forcefully create space for their marginalised comrades. The film won several prizes at international film festivals including the Felix Prize at the Rio International Film Festival and Best Film at Merlinka film festival (Serbia) in 2017

W(A)RM HOLES, Leyser’s most recent work, premiered in Berlin’s Maxim Gorki Theater in 2019. The play follows five Berliner’s of differing generations on a journey through Berlin’s queer history. The performers were encouraged to channel their icons, ex-lovers and past selves to explore the intersection of queer identity in a collective consciousness.

Leyser was the inspiration for the character of Yony in Israel Cárdenas & Laura Amelia Guzmán’s film Holy Beasts starring Geraldine Chaplin and Udo Kier, and the character Yoni in Ingrid Veninger’s I am a Good Person / I am a Bad Person. Leyser is a member of the European Film Academy and has worked with some of the world’s most prestigious art and music  icons, from punk princess Nina Hagen to king of filth John Waters as well as Sonic Youth, Iggy Pop, Patti Smith, Amiri Baraka, and Peaches.

Leyser’s productions have received critical acclaim from international publications including The Guardian, The New York Times, Der Spiegel, NME, Wall Street Journal, Vice, The LA Times, Haaretz and dozens more. Leyser has exhibited and performed at Manifesta in Zurich, Sprechsaale Gallery in Berlin, No No Gallery in Melbourne and Heaven Gallery in Chicago. He has done guest film programming at Chicago International Movie and Music festival, 3hD art festival (Berlin), and the B3 Biennale (Frankfurt).

Today, Yony Leyser continues to blaze a trail for the global queer community with his upcoming book, Queercore: How To Punk A Revolution, An Oral History and a new feature film.

No items found.
CURRENT & upcoming performances
CorpOrale 2020-Present: https://vimeo.com/496268331 A transformation from bodies into an orchestra, a sound-performative installation maintaining the same characteristics, research, and compositional principle. CorpOrale is currently ready to be distributed as a structured 35-minute performance.. and is currently looking for funds or residencies to be able to expand it.

BLUE 2020-Present: https://vimeo.com/529345124 Blue is a video art work that was born during the first lockdown in collaboration with the director and video maker Ivan Neri.I intend to transform blue into a performative installation, reconstructing inside a hypothetical exhibition space the cellar in which I closed myself to work during those interminable and dark weeks of lockdown. Thus recreating that intimate place suspended in time, and inviting one spectator at a time to enter and immerse themselves in this intimate, suspended, and solitary space.
-video and performative installation available for distribution.

Embodied space 2021: Embodied space is a long durational and site-specific performance conceived in 2019 but still never performed. Embodied space has been selected by the Marina Abramovic Institute to take part in a group exhibition dedicated to long durational performance at the Feltrinelli Foundation in Milan, during the Milan design week (it should have happened last April but due to the covid the date has yet to be defined). Last April 2021 I was selected with this project to take part in a 1-month residency at the Q21, Museum quarter Vienna. A video project from the work Embodied space was born from this residency, in collaboration with Ivan Neri, but we are still in the editing process.
-this performance is available for distribution.