Linder’s practice focuses on the specifics of dance and how the medium relates to notions of value, desire, technology and collective psyche. 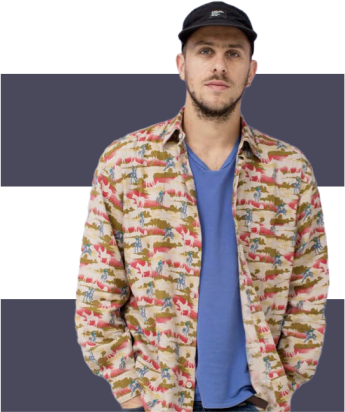 Adam Linder works between Los Angeles and Berlin. His dances are often presented in theatre and exhibition contexts. Linder has stretched choreographies into formats of text, costuming, service provision and opera. Full Service, a survey of his Choreographic Services No. 1–5, was presented by the CCA Wattis Institute in San Francisco in 2018 and travelled to Musée d’Art Moderne Grand-Duc Jean in Luxembourg in 2019. In 2020, Linder’s solo exhibition, Shelf Life, was commissioned by the Museum of Modern Art, New York.

Linder participated in the 20th Biennale of Sydney, 2016; Liverpool Biennial 2016; and Made in L.A. 2016, Hammer Museum, Los Angeles, for which he was awarded the Mohn Award for artistic excellence. The award included the publication of Who Is Surfing Who, a monograph regarding Linder’s stage works.

Adam Linder works with choreography in multiple formats; his pieces are often presented on stage or in an exhibition space. Linder’s practice focuses on the specifics of dance and how the medium relates to notions of value, desire, technology and collective psyche. At age of fifteen, Linder was scouted by The Royal Ballet School in London and left Australia to pursue a career as a dancer. Linder’s rigorous early training was later consolidated during formative years spent performing with Michael Clark Company and Meg Stuart’s Damaged Goods where he developed the critical and experimental strands that inform his choreographic work.

Linder gained wide recognition with his Choreographic Services (2013-ongoing), a series of performative works that can be hired on an hourly basis. The first service, Some Cleaning (2013), saw Linder choreograph the gestures of cleaning, turning commonplace actions into a series of movements that took on their own formal significance. The hiring of the Choreographic Services calls into question how we monetize labor, and what kinds of work we consider to be valuable. In doing so, the artist challenges his own understanding of the special relationship between body and choreography: “To treat choreography as an object that can be bought, that is then possessed, that is then transferred…is antithetical for me to the idea of choreography in which the activity, the knowledge, is really held in the body.”

While in residence at Callie’s from June to December of 2018, Linder developed his first opera, The WANT, which premiered at the HAU and has toured internationally. Inspired by Bernard-Marie Koltès’ 1985 play In the Solitude of the Cotton Fields, The WANT is structured around an exchange between a client and a dealer. Composed by Ethan Braun, staged by artist Shahryar Nashat, and with a libretto by Adam Linder and Sarah Lehrer-Graiwer, the work contemplates desire and the way it both animates and alienates us. As the four performers oscillate between combative and intimate roles, the opera speculates on our ability to know ourselves, let alone another.

Following The WANT, Linder returned to Callie’s in 2019 to develop She Clockwork, which premiered in Venice at the Victoria Art Foundation the same year. Most recently, Linder presented his commissioned work for six dancers Shelf Life (2020) at the Museum of Modern Art in New York.

Adam Linder was born in 1983 in Sydney, Australia. His choreographies are presented on the stage and in the exhibition space. Linder has stretched choreographies into formats of text, costuming, service provision and opera. FULL SERVICE, a survey of Choreographic Services 1–5, was presented by the CCA Wattis Institute San Francisco in September 2018. It travels to Musée d’Art Moderne Grand-Duc Jean in February 2019. Recent solo or two-person shows have included The Museum of Modern Art (2020); South London Gallery (2018); Kunsthalle Basel (2017); Schinkel Pavillon, Berlin (2016); and Institute of Contemporary Arts, London (2015). His works have been commissioned, presented or hired by venues such as HAU Hebbel am Ufer, Berlin; Museu de Arte Contemporânea de Serralves, Porto; Kampnagel, Hamburg; Sadler’s Wells, London; 356 Mission, Los Angeles; and The National Gallery of Victoria, Melbourne. Linder has participated in the 20th Biennale of Sydney (2016), the Liverpool Biennial (2016) and Made in LA (2016) at Hammer Museum, Los Angeles, for which he was awarded the Mohn Prize for artistic excellence. As a result of this prize, a monograph focusing on his stage works Who Is Surfing Who was published. Linder lives between Los Angeles and Berlin.